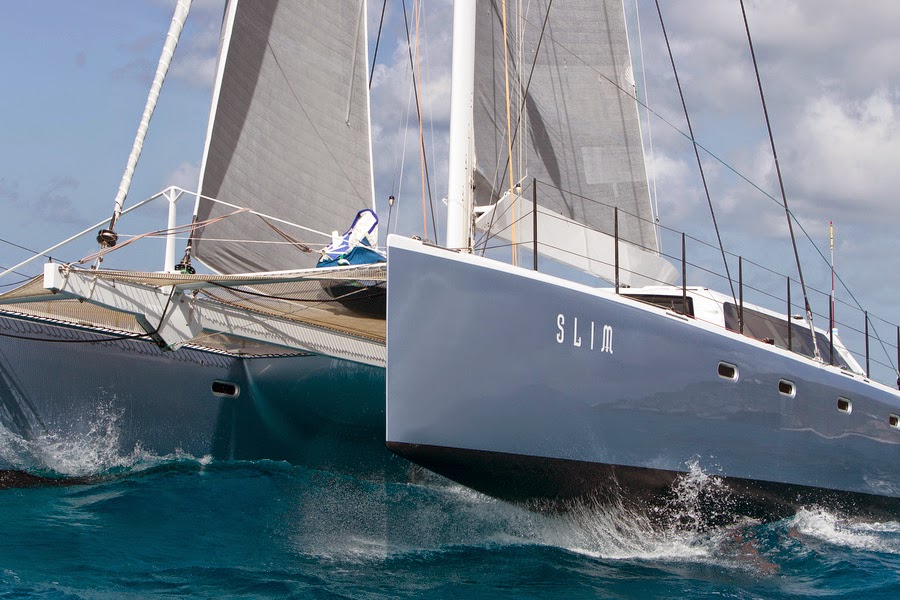 "The boards have been built to exemplary standards and have exceeded what we hoped they would do."

"The boards built by Carbon Ocean Yachts have given Slim a whole new life force. We now sail up wind at angles and speeds most performance monohulls only dream of. The more efficient boards have also allowed us to reach hull speeds sooner in lighter winds and have balanced the boat out. So she’s become a pleasure to helm from 5-25kts with gentle precise corrections.

Our board production start was delayed due to back orders of the precise carbon required for the job. Carbon Ocean Yachts worked over time, often 20-hour days in rotation to get the job completed. The boards have been built to exemplary standards and have exceeded what we hoped they would do for making Slim a safer, faster all round ocean cruising catamaran.”

Carbon Ocean Yachts was subcontracted to build a carbon fibre deck tool and a prepreg carbon fibre deck for a military contractor producing a 55' fast response vessel. vessel was 55’ in length. Due to the requirement of being capable to build up to 50 prepreg parts off one tool, Carbon Ocean Yachts chose to build a solid carbon tool with high temperature resin. Carbon fibrestructural beams were used to strengthen the mould.

Carbon Ocean 82, Aegir was unbeaten both on the water and corrected at the Maxi Yacht Rolex Cup, Cruiser/Racer championship, 2012. In addition, Aegir came first place in the Maxi Racing class at the 2013 Maxi Yacht Rolex Cup world championships in Porto Cervo and was the winner of the 2011 International Superyacht Society Design Awards, Boat of the Year (24m – 40m).

The entire project from start to finish was managed by Britt Colombo and Toby Mueller.

Carbon Ocean Yachts utilized a 5 Axis CNC machined female tool for the underside shape of the top in order to incorporate the structure into the mould and save time, cost and weight in the fairing of the finished surface. The part was laminated with carbon fiber over Divinycell foam with a custom Proset resin system. The 30 square metre structure weighed just 1750 pounds.

Naval Architecture was by Dubois Naval Architects and composites engineering was by SDK Structures. The hardtop was delivered and installed in the Spring of 2011.